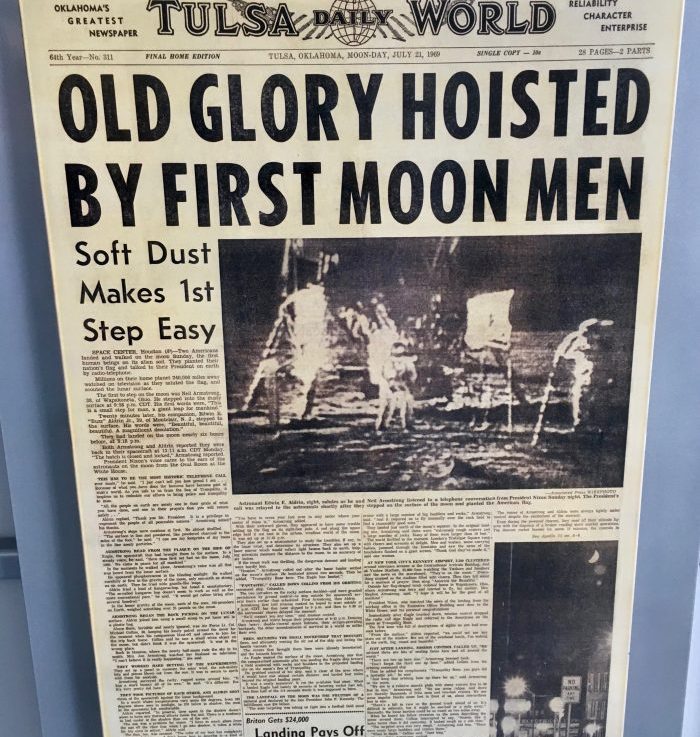 We are just back from grabbing some summer sun in Florida. And if you’re thinking it’s all very well for some, but what on earth does this have to do with London? Then bear with me.

Our hotel, located on the ‘Space Coast’ was a forty-five-minute drive from the Kennedy Space Centre at Cape Canaveral. I could tell you what a fantastic museum it is, about how you can see the space shuttle, the Apollo rockets, the moon buggy, get to touch moon rock, but that stuff you can find on Trip Advisor.

Walking by one of the Saturn rockets that sent Armstrong and Aldrin hurtling towards the moon there are a series of front pages capturing the excitement of the moment. A Saturn rocket may be an awe-inspiring sight, but a splash about the moon shot, for an old news hound such as myself, is impossible to resist.

Working through the headlines: “First footprints on alien world” –  “Everything ‘Go’ Astronauts walk in lunar dust” – “Moon is magnificent desolation” –  “Old Glory hoisted by first moon men” my eye was caught by the headline: “Briton gets $24,000. Landing Pays off.” It was a short article at the foot of the Tulsa Daily Herald from 21st July 1969 and tells the story of David Thelfall who, in 1964, placed a bet of £10, that a man would set foot on the moon before 1971. At the time £10 was twice the weekly wage.

Threlfall later said: “In 1963 I heard President Kennedy make a speech in which he said there would be an American on the moon by the end of the decade. I thought if a bookmaker was prepared to offer reasonable odds it would be a common sense bet.”

Threlfall contacted William Hill and was duly offered the odds of a thousand to one. When Neil Armstrong took his ‘giant leap for mankind’ and the bet was won, the bookmaker presented Threlfall with a cheque for £10,000 live on TV from a London studio. In today’s money that’s around £150,000.

William Hill never revealed who their representative was who offered such absurd odds and as for Threlfall, he went out and bought an E-type Jag.