Those of you who read this blog regularly will know that on occasion I talk about my prostate cancer treatment under the title The Unwelcome Guest. It’s been pointed out that this more serious stuff sits uncomfortably with the flippant flim-flam and fol-de-rol that I usually turn out here.

That being the case, The Unwelcome Guest has been packed into a removal van and dragged kicking and screaming to its own blog. If you want to keep up with the little bastard this is where you need to be as The Unwelcome Guest won’t be appearing on A Little London Life in the future. 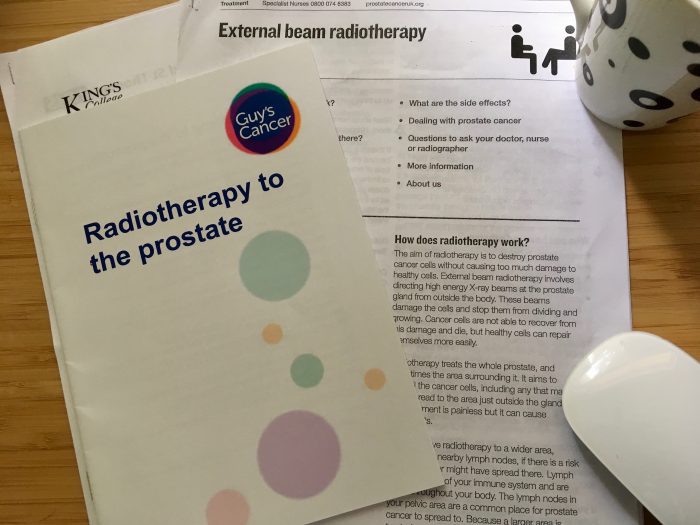 Probably like you, I’ve been sizzling in sun rays this summer, but very soon, as part of my prostate cancer treatment, I’ll be bathing in radio waves. I’ve known for some time that radiotherapy, the pointy end of my treatment, would start in September. It was established early on, that my prostate was not ripe for removal, so I’ve been on hormone therapy to shrink the Unwelcome Guest and that treatment, despite some irritating side-effects, seems to be working well. Now it’s nearly time to enjoy seven weeks as a guest on Radio Therapy.

You, dear reader, have almost certainly never had radiotherapy and I hope you never do, but this is the kind of cancer stuff that rarely gets talked about except among family and friends. So, I thought some of you might be interested to know what goes on. If you’d rather hack your arm off with a blunt penknife, I totally get it. Go find some more pleasant, diverting activity: take the dog for a walk, play guitar, read a book – I would probably do the same.

Anyone still here? OK well, it all starts, as does just about everything these days, with a PowerPoint presentation. To which you might say, Christ haven’t these poor bastards suffered enough? At 10am on a bright, clear, sunny day, the cancer contingent all trooped into a room in the urology department at Guy’s Hospital to find out our fate. Most were surprisingly chipper, though some looked as though life had taken a couple of chunks out of them. We all had a question on our lips: Radiotherapy, what’s that like then?

Jenna, the bright and breezy Urology Advanced Practitioner, had the answers. I’m to have radiotherapy five days a week for seven weeks at the same time and place every day. I get weekends off for good behaviour. The treatment doesn’t hurt and I’m not walking round like some kind of mobile Chernobyl, I’m safe to handle, but there are side effects. More about those in a moment.

I’ve never been a tattoo kind of guy. In my youth it was squaddies, crims and sailors who got inked, not nice middle-class boys like me. All that’s set to change. I’m now getting three tattoos, one on each hip and one just below my navel. These small dots will be used to line me up on the Intensity Modulated Radiotherapy do-dat in the same, correct position each time. Fairly soon, I have a terrible feeling I’m going to start talking about my ‘cancer journey’. If I do, a sharp blow to the head should fix it.

Us prostate people will also be drinking gallons of water over the coming weeks to enlarge our collective bladders (that might be an image you’re going to struggle to forget). This pushes the healthy organs out of the radio beam’s intrusive gaze and makes sure it’s just the prostate that receives both barrels. In fairness that’s not exactly the words Jenna used.

But hey, it’s not all just fun stuff. While the treatment may be pain free it does come with some baggage. It seems that about a month into the treatment I may start to feel dog tired and will have to take to my basket. I may be hopping to the loo twice a night and also my bowels…. whoa, whoa, whoa, actually you know what? You’ve suffered enough, if you want to know more Google it.

After the seven weeks the cancer should be nailed, but cancer is nothing if not a slippery bastard, so I’m then monitored every few months to see if the Guest has checked out or has decided to dash back because it had forgotten something.

Towards the end of the talk a little wizened man at the front who hadn’t said much suddenly piped up: “Can we drink alcohol during the treatment?” It was a sort of cartoon moment, there was total silence and total concentration as the room collectively held its breath. Well Jenna, well, can we? 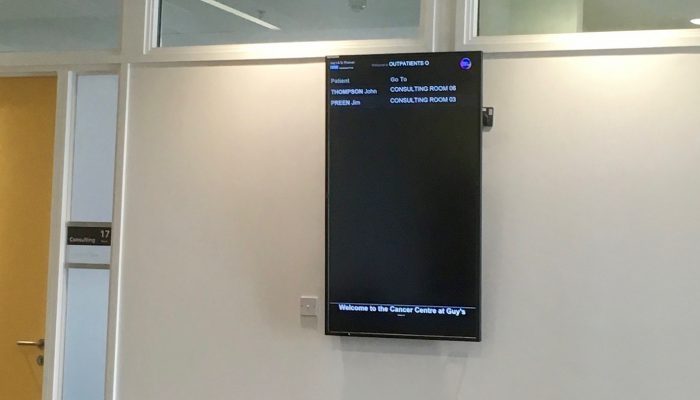 Those of you who have been reading this blog for a while will know that at the end of last year I was diagnosed with prostate cancer. I’ve been blogging about it under the title: The Unwelcome Guest.

People are very kind and often ask how I’m doing and the answer is I’m doing fine. I went to see my oncologist yesterday (boy, I hate those seven words) and my progress is good. I’m on a particular form of therapy to shrink the tumour and a blood test that gives an indication as to how that’s going was encouraging. My PSA level came out at 0.8 and all you need to know is that I started out on 5 so I’m well on the way to the highly desirable zero. The joys of radiotherapy will have to wait until September. End of cancer update: Regular ‘A Little London Life’ flim-flam will resume. 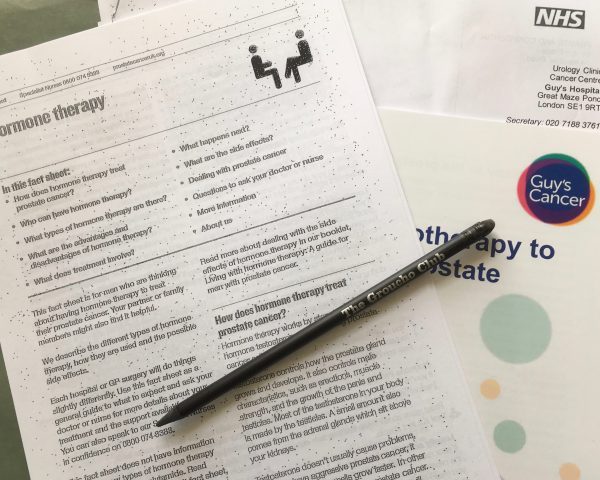 Since I last posted: Stephen Fry has fessed up, George Monbiot, the writer and environmental activist, has outed himself and now Bill Turnbull, the former BBC Breakfast host is in on the act. Prostate cancer gets the full celebrity endorsement as all the poor bastards have it; proving that PC is nothing if not democratic.

When I meet people who I may not have seen for a while but who know about my condition, I gauge four different responses.

Let me say right away that every response is just fine. If you don’t want to talk about cancer as it gives you the heebie-jeebies I completely understand. It can give pleasant banter a savage blow to the head. Instead, let’s chat about playing guitar in a rock & roll band, when Wenger will finally leave Arsenal, how wonderful Aimee Mann is or the relative acting merits of say Jennifer Lawrence or Amy Adams. Dammit I’ll even talk about Donald Trump if we have too and yes, I have read ‘Fire and Fury.’ If you don’t want to talk about prostate cancer, then neither do I.

As to the second response, I can usually sense when someone is not sure whether cancer is a subject that should be raised in a social situation, so I raise it anyway but make it clear I’m not going to bore on about it. People usually want to know why I first went to the doctor (I had blood in my urine), how I’m feeling (Just fine thanks, I don’t plan on collapsing over the finishing line any time soon) and are you still able to drink? (Yes, and mine’s a large one) People are so dear, I’ve never been bought so many lunches and drinks, so thank you.

My response to those who come right out and ask me how I am is pretty much the same as the above, but with a little more detail. I went to the doctor because I had blood in my urine, but that’s gone away, so thank god I got checked out because if I hadn’t it would now be spreading and the two things we all know about cancer are:

b. If we’ve got it then let it be small, insignificant and localised.

Health note: (ignore the next couple of paragraphs if you are of a nervous disposition) I then assume the serious face and tell the guys to go get their PSA (Prostate-specific antigen) checked. It’s just a blood test but gives doctors an inkling as to whether you might be in trouble.

My PSA is quite low at 2.61 and a few years ago doctors may have left it at that, which would have been a mistake, but my Gleason Score, which grades the cancer, is quite high at 7. This is me: Gleason score 7 (4 + 3). I’m told most of the cancer cells found in the biopsy are likely to grow at a moderate rate, though some look likely to grow more slowly. It also indicates, as does the MRI scan, that most of the cancer is retained within the prostate, with just a small section attempting to break on through to the other side. I could now go on to tell you about the glories of having a biopsy but as you’ll probably never need one, I’ll leave it there. Put it this way if a prostate biopsy was rated on TripAdvisor, it wouldn’t get many takers.

And so finally to the person (rare in my experience), who wants the full enchilada, the whole story. Frankly, if they want it, they get it. It doesn’t really become me to be coy and reticent when here I am blogging to all-comers about my predicament.

I tell them about my treatment: no prostatectomy, which is the removal of the entire prostate gland, as a tumour is too close to my rectum for safe cutting and hacking. So, I’m on hormone jabs to shrink the tumour until September when the guest will be blasted with radiation in an effort to encourage the little bastard to check out. I could tell you about the side-effects of hormone therapy, but I think, dear reader, you have suffered enough. And frankly they are as nothing compared with the side-effects of being sixty-three.