My band, Jim Preen Soul Set, is playing at the Stage Door Pub in Waterloo this Saturday 11th November. We hit the ground running at 9pm.

As the name suggests there with be bucket loads of beautiful boogie, soul and blues.

The Stage Door Pub is on Webber Street SE1 8QA, behind the Old Vic Theatre. 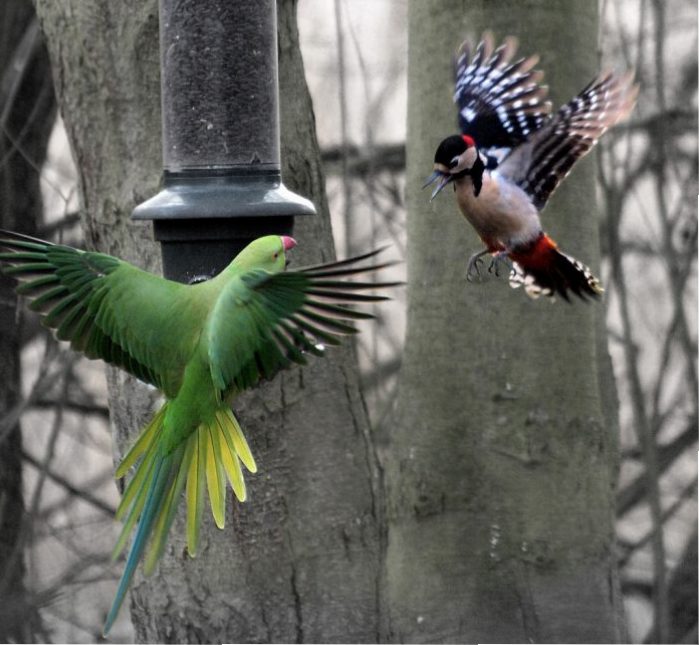 My short blog on London’s ring-necked parakeets has sparked some comment, particularly whether they are a menace to our indigenous birds.

James said: “I have noticed a HUGE decline in small birds in the back garden since the arrival of the parakeets.”

To try and get beyond anecdotal evidence I turned to the RSPB to see what they had to say. Here’s what I learnt.

There are various reasons why parakeets do so well here:

The RSPB is concerned about the interlopers’ effect on our native fauna, but are not currently calling for a cull. This may change as their population rises and their numbers need to be monitored.

Despite being incomers the ring-necked parakeet is protected under the Wildlife and Countryside Act, though it is illegal to release them into the wild.

So in short, it looks like the RSPB, along with most avian species, is sitting firmly on the fence when it comes to the Posh Pigeon. It also means I’ve probably not moved this debate on any further.

But here’s something animal related that is unequivocally good; Blue Planet II is currently the most watched programme of 2017. Yes, a show about animals presented by someone in his nineties has scored 14 million viewers. According to The Guardian newspaper this made it not only the most watched programme of this year but the third most watched of the past five years, behind only the football World Cup final in 2014 and last year’s Great British Bake Off final.

As the camera goes deeper towards the ocean floor, seven miles down last week as I recall, the animal life gets more and more strange and everything starts to look like a 1970s prog rock album cover.