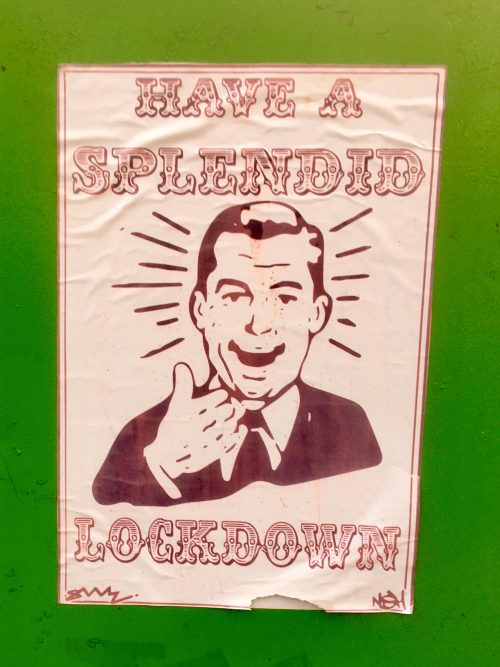 We’ve never lived a year like it. Just over twelve months ago the Prime Minister told us to go home and that’s pretty much what we did albeit with a slight hiatus over the summer. We’ve mostly been home, cooped up and closeted.

Life has been directly informed by whether you like your home and the people in it. We were told we were ‘all in it together’, but that ‘it’ varied wildly from those with a large house and garden surrounded by a loving family to those closeted in abusive relationships or living alone twenty stories up in a tiny apartment with no access to a garden. It’s been a series of very different journeys which have determined how tolerable or otherwise our lockdown has been.

Then of course you may have caught Covid, a most pernicious and almost incomprehensible illness. Some caught it, displayed no symptoms and are still unaware they ever had it. More than a hundred and twenty thousand got sick and never recovered. For others still hanging on after being ill for weeks or months it continues to be a long brutal battle.

And what about babies and very young children, usually the most vulnerable to disease? It seems to have had little or no impact on their young lives. How can that be? Slightly older kids may not have been physically affected by the disease, but many have been hurt badly by the psychological fall out.

Days seem to pursue a relentless course of not very much. In this house we all work or are trying to navigate ‘A’ levels. We moan when the broadband is as bad as dial-up and our super important call disintegrates into digital dust.

In the evening we watch Netflix or a BBC iPlayer boxed set. We’re currently on the wonderful French farce ‘Call my agent!’ and then settle down for the 10 o’clock BBC News, unless the news is too dreadful to watch. I’m now fully acquainted with all Sophie Raworth’s broadcast outfits and frankly Soph it’s time to go online and select a couple of new ‘fits as I gather, they are now called. (Thanks to daughter for that). I really need to get out more, but then again so do you.

If you’re a keen reader of A little London Life, you’ll know that over the summer we moved to Essex for three months while our kitchen was given a complete makeover. Builders seemed to have worked right through the pandemic.

And there in the Essex house that we rented from friends was a small upright piano. I was determined to do something during lockdown that would mark some kind of growth and started hammering out gibberish on the piano. Well, that hasn’t stopped as a lovely friend from my days at ABC News gave me a digital upright which now gets beaten into submission on a nightly basis. I’m still an astonishingly bad player but having played guitar for almost 50 years I do understand music’s basic wiring. I know what’s going on under the hood, which I’m now struggling to translate on to the keyboard. It’s a battle but I’m in it for the long haul. Sorry neighbours.

So how has it been for you? Still struggling to coming to terms with it all? Doing OK? Coming up for air?

It’s odd to try to recall what happened when almost nothing happened.  The major events that typically bookmark our personal orbit round the sun were in short supply from March of last year. No holidays, no going out, no meeting with friends, no journeys, no business meetings. Social interaction reduced to a Zoom call. Work seems like a series of tasks rather than a collaborative experience.

What do I miss most? Is it gigs, theatre, art galleries, cinema, having pleasant things in my diary to look forward to? Yes, all of that but not really that either. What I really miss is just being in the presence of my fellow humans. Hugging, kissing hanging out, drinking, chatting. Life with a forward trajectory built into it. How do we know we’ve achieved anything if we keep busy but are often busy doing nothing?

It’s certainly not over yet, but the various vaccines are a beacon of hope. I remember talking with someone at the start of it all saying I thought the chance of getting a vaccine quickly was slight at best and there was a good chance there would be no vaccine at all. Science has come to our rescue, we have vaccines, there is a way out. Let’s have no mealy-mouthed anxiety. Roll up your sleeve.

As the little bumper on the BBC says: The future isn’t cancelled. See you on the other side.

I took a stroll to the Photo London Exhibition at Somerset House with Gyuri Szabo. He’s an old friend of mine, and an amazing photographer, who decoded many of the photographs for me and made sense of some I didn’t understand.

I usually let the words do the talking on this blog, with pictures something of an afterthought, but with Gyuri taking shots as we went around and the organisers kindly allowing me to use a few of the exhibition pictures, I thought I’d turn the tables and give you a visual treat. 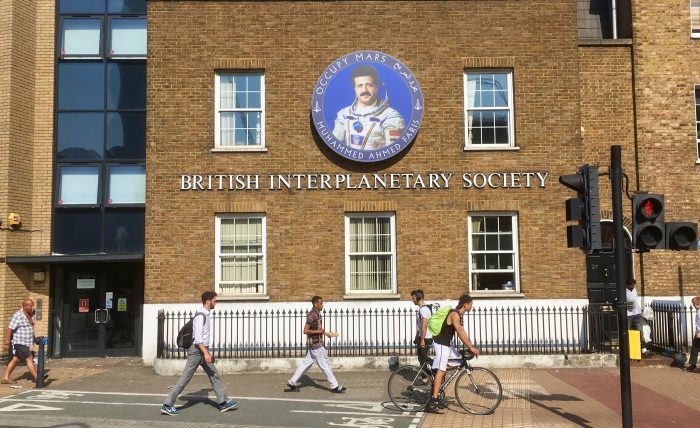 This Saturday (7th July) is Art Night with exhibitions and installations stretching down the South Bank through Vauxhall and on to Nine Elms and Battersea. This year the festival is partnering with the Hayward Gallery, which has curated projects by twelve internationally renowned artists.

One of whom is Turkish born Halil Altındere whose exhibition, Space Refugee (2016–18), is at the British Interplanetary Society (BIS). Walking south from Vauxhall Cross you may have seen the large circular picture of an astronaut on the wall above the BIS sign. The portrait is of Syrian cosmonaut Muhammed Ahmed Faris, the first Arab and only Syrian ever to travel into space. He visited the Mir space station in 1987.

The artist traces Faris’ journey from Syrian national hero, to pariah of the brutal Assad regime who was forced into exile and now lives in Turkey. Watching the exhibition being assembled, the installation uses a statue of Faris along with memorabilia from his space mission together with found objects at the BIS. Right now, four days before opening, the installation seems to be creating the vibe of an old-fashioned space museum.

At the centre of the show is a video which features Faris talking about the difficulties he faced in Syria, how he became a refugee and whether he will ever return home. Fearful of the fate of all refugees he says: “I hope we can rebuild cities for them (refugees) in space, where there is freedom and dignity and where there is no tyranny, no injustice.” The video also includes interviews with NASA scientists and architects discussing the possibility of a refugee colony in space.

On the circular picture of Faris outside the BIS are the words: Occupy Mars. One of the curators explained that as Mars is owned by no one perhaps the refugees of the world might find a welcome there. A fanciful, but sweet idea living as they do in a ‘hostile environment’ where refugees are often just pawns in a political game.

Now I’m fairly certain some of you will be asking: What the hell is the British Interplanetary Society? I’m here to help. It was founded in 1933 by a group of space flight enthusiasts who dreamed of using rocket propulsion to explore outer space. Today, they are essentially an aeronautic lobby group or think tank who encourage everyone to get spaced, which his handy as the clubbers over the road manage it most weekends.