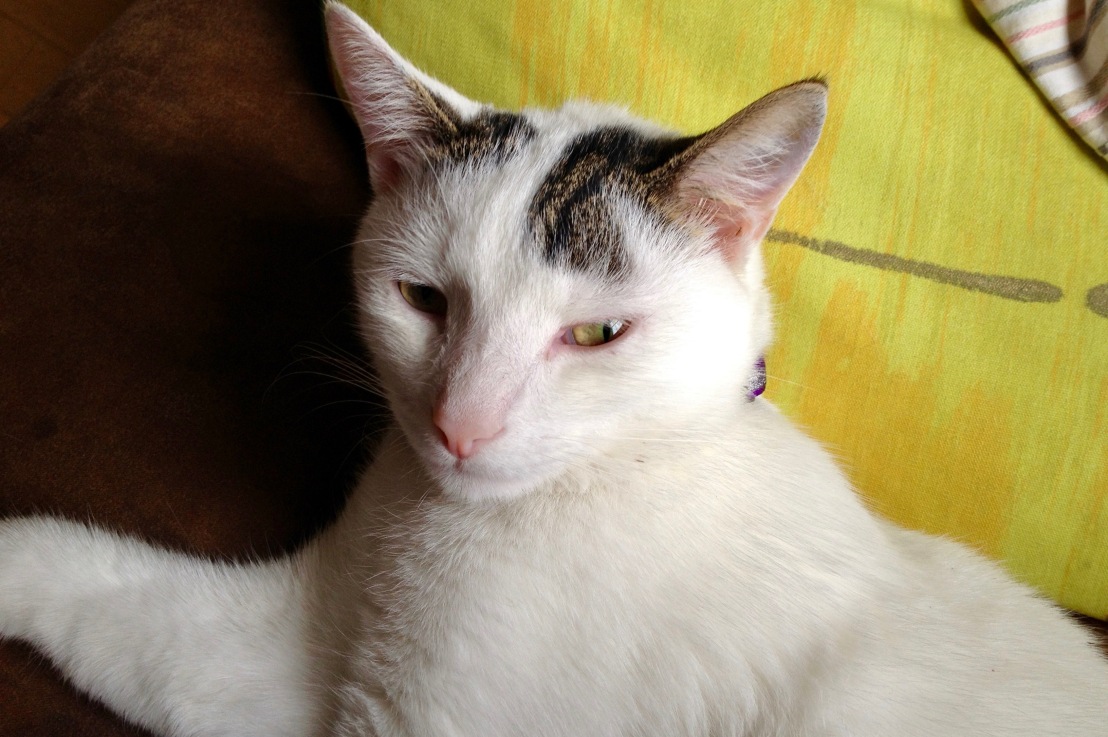 You’re looking at a picture of our cat Ziggy; not an animal I’m particularly fond of as he bites and scratches anyone who dares touch him and he kills birds (obviously an aristocat).

Our neighbour rang the doorbell the other day in quite a state saying Ziggy was rampaging around her house at three in the morning and this had to stop. I suggested an electronic cat-flap which she subsequently installed. If you’re not a cat owner (lucky you), these are activated by a chip inserted into the cat’s neck. Apparently, all went well until Ziggy realised there was a two second delay once the neighbour’s chipped cat went through the flap, allowing Ziggy just enough time to gain access to another’s food and our neighbours finely stretched nerves. I liked Ziggy a little more after learning this, until he killed a thrush last week. Anyway, more of Ziggy in a moment.

Yesterday was as vile a ‘summer’s day’ as you might expect in this rain spattered country. I was working from home and the daughter was glued to whatever screen was available. It was cold and the rain continued into the evening, but we had to get out; we were stir-crazy.

On the spur of the moment I suggested we both head to the Old Vic to see “Girl from the North Country”. It’s not a juke box musical but uses Bob Dylan songs to underscore a play set in depression era America. The daughter had just done ‘Of mice and men’ at school so I thought it might fit.

Unfortunately, this idea came to me at 7.15 and the play was due to start at 7.30. We both piled out the door, ran laughing down the street, on to the tube and reached the theatre in a record 26 minutes, so only 11 minutes late. But here’s the extraordinary thing, they wouldn’t sell us a ticket as once the play starts the ticketing computer system flips to the next day. Computer says no.

Interlude: You may be reading this for some top tips on London life, so here’s one. The Old Vic has £12 tickets for sale that are up in the gods and you sit on a bench. I’ve found they are often available and you can buy them anytime (well I say that, obviously not after the show has started) and the great thing is that on several occasions I’ve been waved to an empty seat which would have cost around three times as much. If your budget is tight or you’re not quite sure about a certain play it’s a good option.

So, what to do for daughter and self? It’s still raining and cold and we decide to head towards Covent Garden for want of anything better. On the way, the teenager remembers an article about someone in New York roaming the streets and airdropping pictures of their cat on to unsuspecting stranger’s phones. Now we’ve got a plan.

Tech interlude: On iPhones ‘Airdrop’ allows you to post pictures or documents, via Bluetooth, directly on to someone else’s phone. To do this both phones must have airdrop enabled – not sure if there is a similar option on Samsung or android phones.

Daughter selects the above picture of Ziggy and we set about the essential task of ‘dropping’ our vile cat’s picture on to the phones of unsuspecting Londoners.

Out amongst the hoi polloi of old London town we went in search of those who has airdrop activated. When this happens the ‘dropees’ name appears on your phone, you hit send and Ziggy appears on their phone and they decide whether to accept him into their lives. Our highly scientific research revealed that people of Asian origin were the most likely to be airdrop ready. Watching for the surprised looks on the face of those who had been catdropped was the best part.

The daughter claimed to be doing ‘god’s work’ and in just over half an hour Ziggy found four new homes. Frankly, they’re all welcome to him.