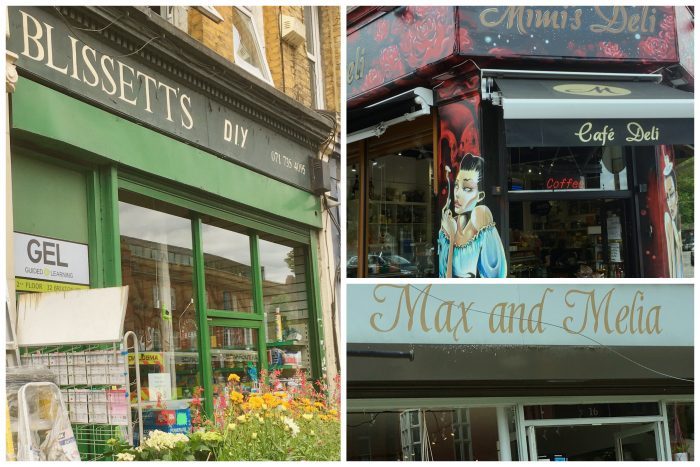 Our neighbourhood is fenced in by Brixton Road, Clapham Road, South Lambeth Road and Wandsworth Road all of which fetch up either at Oval or Vauxhall. Lots of roads, but no Hight Street; no banks and no big destination stores, but what we do have are great independent shops.

Use ‘em or lose ‘em may be a cliché, but when it comes to retail it’s quite literally true. Shop local because if you don’t, what do you get? More boarded up buildings, more chicken nugget boutiques and yet more bookies. That’s a future we can do without.

So here are three local shops for your consideration: Max & Melia, Blissett’s and Mimi’s Deli. I took a stroll round to all three and asked the owners why people should pay them a visit.

Max & Melia is a gift shop; go in for a card and pick up a present. The owners have a terrific eye for quirky gifts, so while there are plenty of scented candles, greetings cards, and a rather fine Queen & Corgi salt and pepper set, you will also discover ‘shabby chic’ antiques. The owners scour auctions and markets for the unusual and idiosyncratic. They don’t claim to be antique experts, but they buy what they love, and they know what their customers want.

M&M opened its doors in November 2012 and originally intended selling furniture and other bigger homeware items, but customers started calling it the Little Oval Gift Shop, so that’s what it became.

Maxine, one of the owners, makes the point that what they offer is personal service. Come in a few times and you’ll be greeted by name, made to feel welcome and offered informed suggestions as to what you might want to buy.

The shop has just won a prestigious award. Battling against other top independent outlets from across London they received a Greats Award and were named ‘Independent Gift Retailer of the Year’.

They are dog-friendly (they own two), they have goods from all over the world, but they are on our doorstep so: think global and shop local.

Google Blissett’s hardware store and the reviews are spot on:

Blissett’s is no new kid on the block. It was a building firm after the war employing some 27 men and was bought by the current owners’ Dad in 1981, who decided to retain the name but turn it into a builder’s merchant. 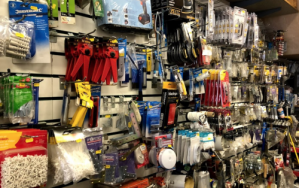 When asked why people should visit their shop, personal service and advice was again high on the agenda. While they still supply builders, many of their customers are now householders doing DIY. I can vouch for this as over the years I’ve sought their advice and products. My wife thinks I’m best at DNY (Do Nothing Yourself) but with their help, I struggle on.

Interestingly, they mentioned that many of their customers don’t have cars and so won’t venture farther afield to say B&Q but would rather use Blissett’s because it’s convenient and just a walk away.

They have a wide range of products which they claim are often cheaper than when sold over the internet and if a customer wants something they don’t have in stock they do their best to have it for them the next day.

Mimi’s has just been spruced up with some rather slinky designs of an elegant woman (is it Mimi?) drinking coffee. Any why wouldn’t she, the coffee is great in this extremely popular family run shop that is both deli and café.

Pop in for lunch or pick up something to take home. In our house their home-made pesto Genovese combined with their fiery chili pasta is always a winner. And my daughter wouldn’t forgive me if I didn’t mention their legendary cannoli.

The café seats 20 people and is ideal for lunch with all the food being prepared in their downstairs kitchen. There’s a full menu every day which includes Italian classics such as pasta and pesto, lasagne and spaghetti Bolognese.

The shop has been a deli for more than thirty years with the present owners taking over in 2009. The financial crash saw off most of our specialist food stores so it’s a delight that Mimi’s has survived and thrived. As with the other shops I visited they pride themselves on giving their customers ‘that special, extra attention that you don’t get from chain stores’.

Mimi’s Deli: It’s our little bit of Italy on the Brixton Road.

You may already use these fine, welcoming establishments, but don’t leave it too long until your next visit.