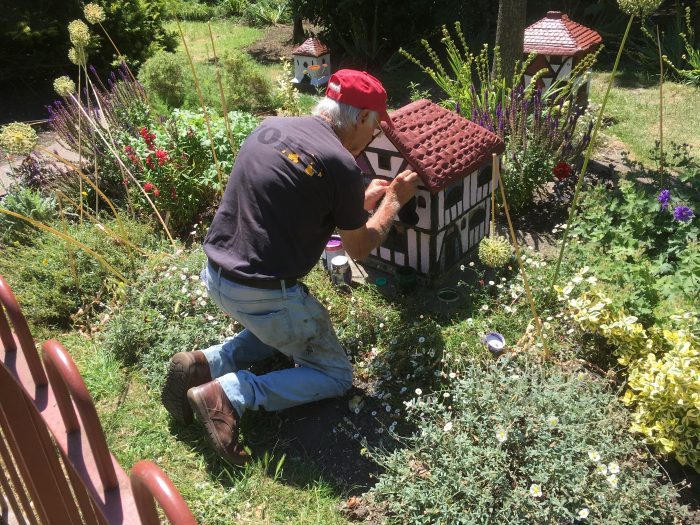 The tiny houses in the Rose Garden of Vauxhall Park are getting a makeover. Nobby, aided by his trusty dog Sandy, said he was giving the crofts and cottages a lick of paint in the suffragette colours of purple, green and white.

Why the suffragette colours? February of this year saw the 100th anniversary of the Representation of the People Act 1918 which enabled all men and some women over the age of 30 to vote for the first time and paved the way for universal suffrage 10 years later. Vauxhall Park has a connection. 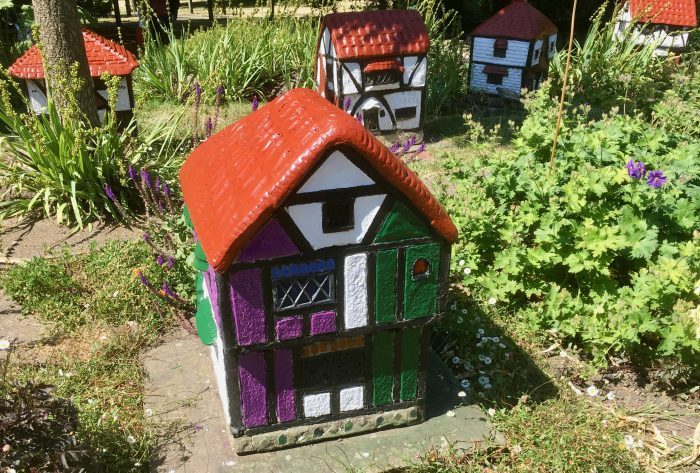 Henry Fawcett (1833-1884) lived in a grand house on the site of the park. He was a Member of Parliament and was blinded at the age of 25 when shot by his father’s gun while the pair were out partridge shooting. Clearly a determined man he became Post Master General, started the parcel post and encouraged women to work at the Post Office.

It was Fawcett’s wish to turn his garden into a communal park after his death. His wife, Millicent Fawcett, made it happen. Involved in the suffragette movement, she became president of the National Union of Woman’s Suffrage Societies in 1897. She also founded Newnham College Cambridge. Quite the power couple.

Talking with Nobby (or Nobby the Grab, to give him his full name) while he was taking a break from the painting and decorating, he told me the houses were made in 1948 by Edgar Wilson who sent a set of 30 to Melbourne, Australia by way of thanks for the food packages sent to us during the war. Next time you’re down under you can take a look.

There are also a couple of tiny detached houses in Brockwell Park near the clock tower.

As to the ones in Vauxhall, local hoodlums used to nick them until Nobby came up with the brilliant idea of filling them with sand and rocks so making them too heavy to shift. There’s only one original ‘Boat House’ left, the other two were made by the man himself. I should point out that Nobby does this on a purely volunteer basis, so if you see him about he deserves a big thank you.